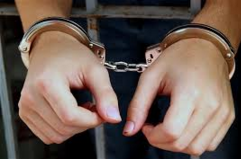 "I did it!" I cried hysterically as I stumbled into the Police Station. The officer at the front desk didn't look up. I stood across from him, tears running down my face, mascara everywhere but on my lashes.
"Did you hear me?"

He looked up briefly then back down at his paperwork.
"Can I help you ma'am?"
My heart was slamming against the wall of my chest. "I didn't want to do it, I had to. Actually, I was dared to."

This time he looked up. His eyes scanned my make-up stained blouse.
"Maybe you'd better come back and speak to one of the detectives."

He lifted the door and invited me through a hall to a wide room of cluttered desks.

"Sit here." He pulled out a chair next to an empty desk. "Can I get you something to drink? Coffee? Water?"
"A diet Pepsi would be nice."

For a fraction of a second, he looked impatient, then he cleared his throat and smiled.
"Diet Pepsi it is."
He disappeared into what looked to be a break room. I heard him insert coins and there was the sound of a can dropping from a vending machine. He came back, tapped the top of the can with his index finger before snapping it open.

He cleared his throat louder this time. "Sure."
I noticed he had a tic that caused the outer corner of his left eye to twitch rapidly.

He turned and walked away, rubbing the back of his neck. When he returned, he had the can of Coke in one hand and a green plastic cup in the other.

I looked at the can and then at the stained green cup. "That's okay, I'll just drink from the can."
"Detective Puglisi!" He called louder than he needed to. "Code eight!"

A large man slowly rose from his desk and lumbered over. He was wearing a rumpled grey suit that looked as if he'd slept in it.
"Can I help you ma'am?"

I burst into tears and looked up beseechingly. "Must all of you call me ma'am? I have a name. It's Venita."
The desk officer quickly walked away.

He reached out to take the can. "Would you prefer water?"
I slapped his hand and then gasped. "Oh! I am so sorry!" I clutched the can in both hands. "I prefer diet Pepsi but if this is all you have, it will work."

He sat down at the desk and took out a pen and pad. "What's the reason for your visit today, V-Veh-Vin-, ma'am?"
I took another swig and made a face. I couldn't stop my knee from bouncing.
"I killed someone."

He looked up and studied my face. "You killed someone?"
"Yes, well, I mean, I didn't do it personally. He was much too strong for me."
"So you arranged to murder someone?"
"In a sense, I guess I did." I nodded in resignation. "It was necessary if I wanted to push forward. You know, progress in my craft?"

I dug through my purse looking for a tissue. He snagged a box off the nearest desk and offered me one.
"Thanks." I wiped my face and blew my nose. "You see, I was told to kill them, kill them all."

Puglisi frowned. "Who told you to kill them?  What craft? Witchcraft? You killed more than one person?"

"No." I dismissed his questions with a wave. "Just the darlings."

Puglisi shook his head. "Let's start at the beginning."
I shifted in my chair, took another sip and made a face. "Let's"

I took in a deep breath and pushed on my knee to stop it from bouncing.

"Yes, that was his name."
"What's his last name?"
I stopped fidgeting for a second and my jaw slacked when I realized.
"I didn't give him one!" I sobbed again.

Puglisi put his notebook back into his jacket pocket. "I don't think you need a detective, you need a doctor."

I tipped the Coke and gulped down the last third. My face must have looked like I had just downed a shot of rotgut. I wiped my mouth with my sleeve.
"I'm fine."

Puglisi's grimace of confusion was comical but then, I have a bad habit of laughing at exactly the wrong moment. I laughed.

"How did Ed die?"
"You know, I thought about that for a long time. How would I do it? I decided to have a man commit suicide by jumping out of a 14 story window and fall on him."
"You talked someone into killing themselves?"
"Oh, no. I didn't know him at all. I just had him do it. I figured Ed would quickly end up as a bloodstain on the sidewalk when it was all over but it wasn't quite as simple as that. It had to flow." I rose up in the chair in excitement. "Should the jumper be in a vertical or supine position? I mean it wouldn't be easy to jump out of a window if you're afraid of heights so you might want to go out backwards. Right? Should it be nighttime? Would the jumper break Ed's neck while he was walking by or should it be daytime and I would have him sitting on a bench watching children play in the park across the street?"

Puglisi frowned. "What children? What park?"

"I finally decided to have the jumper dive from the window, do one and a half somersaults in pike position and meet Ed head to head."

I dented the can and tossed it into the wastebasket then burst into tears again. "I've killed before but I never felt like this. I spent so much time with Ed. He was like family. Oh! Why did I kill him?" I buried my face in my hands.

I felt the detective pat my shoulder. He whispered, "I'm going to take you to the hospital now."
I sat up straight. Stiff as a tombstone. "No, really, I'll be alright." I pulled another tissue out of the box. "It's all Stephen King's fault."

"Stephen King? The author, Stephen King?"
I nodded. "He kills his characters all the time without a second thought. He makes you like them and then he kills them. Women. Men. Children. Dead. Dead. Dead."

I lunged forward to grab two fists full of his lapels and was lucky he didn't draw his gun.

"Do you know how hard it was for me to kill Ed?"

He plucked my hands from his suit and pushed me back. "Characters? Was Ed a character in a story? Are you a writer?"

I blinked in disbelief. "Well, of course he was. What do you think I have been talking about all this time?"

He leaned forward and lowered his voice. "Well, you did come to the Police station and you did confess to a murder."

I stood up and slung my purse over my shoulder. "Honestly, Detective Puglisi, do I look like a murderer to you? Really? And why doesn't the desk clerk know the difference between diet Coke and diet Pepsi?"

Posted by Venita Louise at 2:41 PM

Laughter Is The Best Medicine

Venita Louise
To learn more about me check out my website: http://www.venitalouise.net